Montreal International Fuel Facilities Corporation (MIFFC) is a not-for-profit company owned by a consortium of commercial airlines representing most of the domestic and international carriers serving Montréal-Trudeau International Airport. MIFFC has ensured reliable, secure and efficient aviation refuelling operations in Montreal for over 30 years.

FSM Management Group is the administrator of MIFFC, owner of the jet fuel storage and supply infrastructure at Montreal Trudeau International Airport. FSM has had this role of administrator for 15 airports across Canada representing 6 billion litres of jet fuel delivered each year with a total infrastructure value of more than 600 million dollars.

MIFFC intends to provide more reliable and secure supply infrastructure to better serve Montréal-Trudeau International Airport as well as Macdonald Cartier Airport in Ottawa and Pearson Airport in Toronto. To be able to do this, MIFFC is proposing the construction and operation of an airport jet fuel terminal in east Montreal, located at the Port of Montreal, in a sector dedicated to the petrochemical industry, between Joseph-Versailles Boulevard and Durocher Avenue. The proposed project includes the construction of a marine terminal which will allow jet fuel to be received by ship into storage tanks constructed on land owned by the Montreal Port Authority near the St. Lawrence River in a sector dedicated to the petrochemical industry. Jet fuel will then be shipped by pipeline, by train or by truck using a train and truck loading facility to be constructed on land owned by the Montréal Port Authority.

The terminal will consist of two sites: the first site will include a dock, storage tanks and pumping systems, while the second site, linked to the first site by a connecting line, will include the rail and tanker truck fuel loading systems. Finally, a new pipeline of approximately 5 km will link the first site to the existing jet fuel pipeline located in the Montréal-Est refinery sector which already supplies jet fuel to the Pierre Elliott Trudeau Airport.

This project will enable MIFFC to diversify fuel supply sources, provide flexibility in the distribution options at airports, improve the reliability of the jet fuel import network and transport jet fuel with improved efficiency.

Each year, approximately 330,000 flights depart from the Montreal, Toronto and Ottawa airports. Air travel is dependent on the supply of jet fuel, for which there is currently no alternative nor is there one in the foreseeable future. According to available figures, in recent years, it was found that the production of jet fuel,  was not sufficient to meet the demand. For example, in 2012, the demand for jet fuel was 53% higher than domestic production levels in all of Quebec and Ontario. 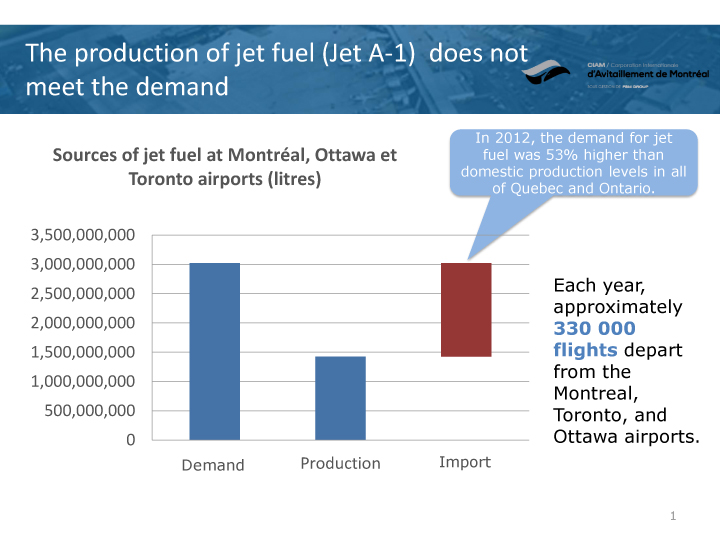 In March, 2014, MIFFC filed a project notice with the Ministry of Sustainable Development, Environment and the Fight against Climate Change (MDDELCC). The environmental impact study and the technological risk analysis were filed on November 6, 2015 and additional information was subsequently provided to the MDDELCC.

The project was authorized by order-in-council by the Government of Québec in June 2019.
MIFFC has therefore initiated the process of obtaining the required permits, certifications and other approvals from regulatory agencies. According to the preliminary schedule, work is expected to begin at the end of 2020 and to last three years.